Our first carrot harvest was approximately two pounds. Two pounds of home-grown organic carrots! I've been waiting what seems like forever for them so I could try fermenting them. 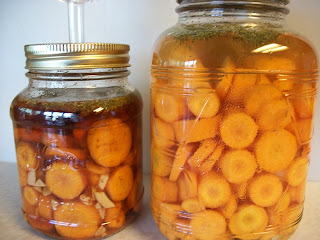 I've read a lot on fermenting vegetables and looked at several recipes.

Here is how I made mine:

I ran my jar through the dishwasher, then poured boiling water in the jar and let it overflow, let it sit for about 5 minutes, then dumped this water out.
I washed and sliced my carrots of course and placed them in my jars just to the shoulder of the jar.
I then added 1 tsp of dried dill, 4 garlic cloves (I didnt have any fresh garlic, so I used some hot pickled garlic I had on hand.) and 2 tsp of coarse sea salt. I then filled the jar up with distilled water. From everything I read, you cannot use tap water because the chlorine will kill the fermenting.

Boy wonder made the smaller jar and made his spicy adding a tsp of cayenne.

Then you put the lid on and sit them on the counter for 3-10 days.

After 24 hours, both jars were bubbling! I can't wait to taste them. 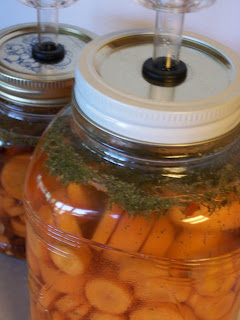 I had looked at fermenting crocks and the price was way out of my budget!

I then looked at fermenting jars. The price of them wasn't much better. So I got to looking at the pictures of these jars and decided to make my own. I only needed two things other than the jars, which I already had.

I ordered 3 Piece Plastic Airlock (Sold in sets of 3)

. Three of them for $5.56, not bad. These let out the gas without letting air in which is supposed to give a closed anaerobic ferment, which helps keep the growth of mold down. 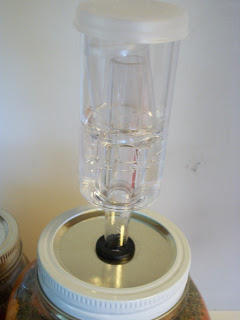 Then I picked up a package of grommets for $2.99 from Westlake Hardware. My total cost was right at $9 and made 3 jars. I have since read that the metal lids probably won't last long, so when they need to be replaced I will use the plastic Ball lids.

I'm hoping to buy some organic green beans at one of the farmers markets and make some dilly beans. I've read that there are many health benefits from probiotic foods, so I'll be having some fun fermenting and adding different veggies to my family's diet.

Have any of you tried fermenting food?